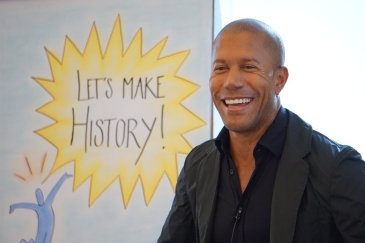 Torrence Boone is the Vice President—Global Client Partner at Google. In this role, he is responsible for driving Google’s strategy and multi-billion dollar business across a portfolio of the world’s largest global advertisers spanning the tech, health and beauty, and CPG verticals. Torrence draws on more than 20 years of experience in major communications disciplines at agencies such as Avenue A—now Razorfish—Digitas, Bain & Company, and others.

Originally from Baltimore’s inner city, as a teenager, Torrence Boone won a full scholarship to Phillips Academy Andover, an elite university preparatory school in Massachusetts, which he credits with helping to establish a foundation for his success later in life. He then attended Stanford University, graduating with a B.A. in economics (honors) in 1991, before earning his M.B.A. from Harvard Business School.

Torrence Boone began his career at Bain and Company and rose to the position of senior manager. He then moved on to roles including the Vice President and General Manager of Avenue A, now Razorfish; Group Director of Marketing and Global Practice Lead at Digitas, until he rose to the position of President at the firm’s flagship office; and global CEO of a full-service, integrated agency startup built by WPP.

In each of these positions, Torrence has helped to lead projects and teams through profound technology-driven disruptions across the advertising and marketing industry, prompting him to ask how brands fit in consumers’ lives nowadays and what channels are the best ways of engaging them.

Torrence Boone continues to ask these questions as a Vice President at Google responsible for global ad strategy and partnerships with advertisers. In this capacity, he leads a team focused on large-scale global strategic partnerships that deploy diverse Google products and platforms to achieve business transformation and breakthrough marketing results.  Within six months of his arrival at Google, Torrence closed three multi-billion dollar global media and tech deals: the largest in the company’s history. He has also developed new product initiatives, launch BrandLab flagships around the world, and more.

Throughout his career, Torrence has been recognized for his professional accomplishments and for his advocacy for diversity initiatives. He has been named to the Financial Times’ UPstanding Power List, Savoy Magazine’s Top 100 Most Influential Blacks in Corporate America and Power 300 Most Influential Black Corporate Directors, and as a distinguished alumnus of A Better Chance, which also presented him with the 2016 Dreambuilder Award. In 2013, Torrence Boone won ADCOLOR’s Advocate Award.

Outside of the office, Torrence Boone enjoys kickboxing, snowboarding, rock climbing, yoga, writing fiction and literature, and the performing arts. He serves on the board of Finish Line, Effie International, and as President of the Board of Citizen Schools, New York.  He lives in New York City, New York.